In enterprise test scenarios, software needs to be tested in the same way as it will run in production, in order to ensure that it will work as expected. A common challenge is that microservice applications directly or indirectly depend on other services that need to be orchestrated within the test scenario.

This article shows how container orchestration provides an abstraction over service instances and facilitates in replacing them with mock instances. On top of that, service meshes enable us to re-route traffic and inject faulty responses or delays to verify our services’ resiliency.

We will use a coffee shop example application that is deployed to a container orchestration and service mesh cluster. We have chosen Kubernetes and Istio as example environment technology.

External services, however, should not be part of the test scenario. In general, test cases should focus on a single object-under-test and mask out all the rest. Therefore, we substitute the external services with mock servers.

Reconfiguring the application to use the mock servers instead of the actual backends contradicts the idea of running the microservice in the same way as in production, since this would chance configuration. However, if our application is deployed to a container orchestration cluster, such as Kubernetes, we can use the abstracted service names as configured destinations and let the cluster resolve the backend service instances.

The following example shows a gateway class that is part of the coffee shop application and connects against the coffee-processor host on port 8080.

This host name is resolved via the Kubernetes cluster DNS and this will direct traffic to one of the running processor instances. The instance that backs the coffee-processor service, however, will be a mock server, WireMock in our example. This substitution is transparent to our application.

The system test scenario not only connects against the application to invoke the desired business use case, but will also communicate with the mock server, on a separate admin interface, to control its response behavior and to verify whether the application invoked the mock in the correct way. It is the same idea as for class-level unit tests, usually realized by JUnit and Mockito. 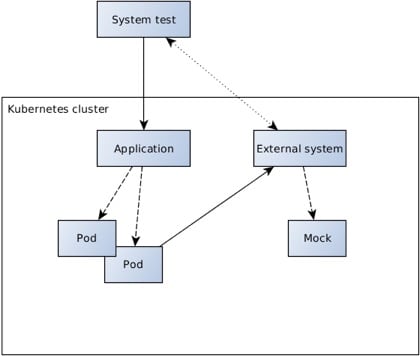 This setup allows us to mock and control services that run inside of our container orchestration cluster. But what if the external service is outside of the cluster?

In general, we can create a Kubernetes service without selectors that points to an external IP, and rewrite our application to always use that service name which is resolved by the cluster. By doing so, we define a single point of responsibility, where the service will route to.

The following code snippet shows an external Kubernetes service and endpoints definition which routes coffee-shop-db to an external IP address 1.2.3.4:

Within different environments, the service might route to different database instances.

Service meshes enable us to transparently support technical cross-cutting communication concerns to microservices. As of today, Istio is one of the most-used service mesh technology. It adds sidecar proxy containers, co-located with our application containers, which implement these additional concerns. The proxy containers also allow to purposely manipulate or slow down connection for resiliency testing purposes.

In a end-to-end test, we can introduce faulty or slow responses to verify whether our applications handles these faulty situations properly.

The following code snippet shows an Istio virtual service definition that annotates the route to coffee-processor with a 3 second delay for 50% and failures for 10% of the responses.

Now, we can run additional tests and verify how our application reacts to these increased response times and failure situations.

Besides the possibility to inject faulty responses, service mesh technology also allows to add resiliency from the environment. Proxy containers can handle timeouts, implement circuit breakers and bulkheads without requiring the application to handle these concerns.

Container orchestration and service meshes improve the testability of microservice applications by extracting concerns from the application into the operational environment. Service abstractions implement discovery and allow us to transparently substitute services or to re-route. Service meshes not only allow more complex routing but also allow us to inject failures or slow responses in order to put our applications under pressure and verify their corresponding behavior.

This article is shared by www.itechscripts.com | A leading resource of inspired clone scripts. It offers hundreds of popular scripts that are used by thousands of small and medium enterprises.